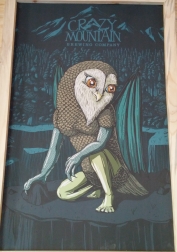 In a quick turnaround, the space in Glendale formerly belonging to World of Beer has re-opened a little over a week as the Crazy Mountain Cherry Creek Taproom. Given the fast re-open the space can’t have changed much but now the offerings feature Crazy Mountain year-round beers and Local Stash seasonals plus guest beers from other craft breweries. Still no food, but non-beer drinkers will appreciate the wine and cocktail options. Crazy Mountain also acquired the also-closed Lakewood World of Beer location in Belmar in Lakewood and plans a similar taproom shortly.