This short ride combines both trail and street riding and can potentially pack in a lot of brews in one afternoon. If you need sustenance along the way or want to offset the beer, both Kline’s and Denver Beer Co. have kitchens and Odyssey generally schedules a food truck.

The ride starts at Kline’s Beer Hall in Olde Town Arvada, which features a wide range of beer styles on their 50+ taps. A majority of the beers originate in Colorado but many hail from further away and provide more than enough options for every taste. On a Sunday afternoon the place was rather dead but looks big enough accomodate a lively crowd for the frequent live music shows on weekends. A small shaded patio out front offers a relaxing summer alternative as well. After trying a few interesting selections there, our group decided to move on to our second destination, Someplace Else.

Fortunately one of our group lives in Arvada and planned out the route, as SomePlace Else Brewery is hidden down an alley in an industrial park near I-76 & 52nd Ave. To get there we headed east out of Old Town on Grandview, took a right on Lamar, and kept a close watch for the small Brewery banner on the left just before 52nd Ave.

After locking our bikes we enjoyed the cozy, rustic, Star Wars-themed atmosphere of the small brewery along with the great service and most importantly the diverse taplist. The brews ranged from a very light pilsner to stouts and a porter and everyone in our group enjoyed what they tried. Unfortunately SomePlace Else doesn’t have a patio, but the open garage doors helped to bring summer indoors. 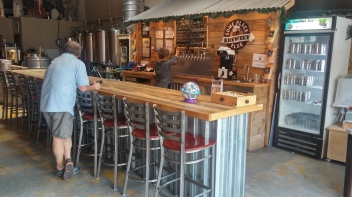 Our route continued further down 52nd, under the highway, onto the Clear Creek Trail northbound, then took a short jog on the Ralston Creek Trail to arrive at the industrial park on Ralston Road that Odyssey Beerwerks calls home. Odyssey is not obvious from the road, but if you go left just inside the industrial park and head all the way to the back, the patio umbrellas, food truck, and usual brewery signals become apparent. I was happy to see that Odyssey expanded the bar in their large and bright taproom to provide an easier beer-ordering experience, although many of our group took advantage of the expansive patio to enjoy their beers and food-truck. Odyssey offers a broad range of “regular” beer styles and usually has taps with a couple of offbeat beers like high gravities, seasonals, or sours. As with previous visits, the beers were generally pleasant and very drinkable with a few exceptionally-tasty standouts (usually the seasonals).

From Odyssey, there are two options back to Olde Town Arvada and Denver Beer Co. The most direct route runs straight west from Odyssey along Ralston Road to the taproom at Olde Wadsworth Boulevard. The more scenic route 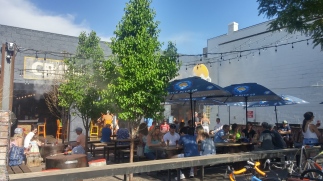 involves crossing Ralston Road  back to the Ralston Creek Trail and following that west til it ends on 60th Ave. Then continue to Olde Wadsworth Boulevard, finally heading south a few blocks to Ralston Road and Denver Beer Co. Much like the downtown location, I found the Arvada taproom big on style and small on substance. The taproom artfully decorated has an RV parked inside which serves as an in-house food truck/kitchen and the large shady patio offered a welcome seat at the end of the ride. The beers haven’t changed since I last tried them and have a rather “washed-out” taste that is devoid of much flavor. With ambitious names involving things like pretzels and graham crackers I guess I expect more than a tiny hint of the suggested flavors. That said, the beer was completely adequate for an end-of ride stop.

After that, it’s just a few blocks back to Kline’s where the ride started. Casual bikers should enjoy this short ride, covering just five miles and with no stretch longer than 15 minutes.  Many options exist to substitute or add breweries for more distance and/or beers so feel free to play around with the linked route map. Look for a post on a longer route that my Arvada connection has planned for a few weeks out!