For non-German speakers, Grossen Bart translates to “Big Beard” and Grossen Bart Brewery carries that theme through their entire operation, from the taproom decor to the glassware and the website to the beer names. Fortunately they didn’t spend all their time and effort on marketing and conceptualizing. The overall impression of the taproom is a utilitarian but comfortable space with friendly service and solid beers. While that wouldn’t necessarily justify a special trip from Denver, Grossen Bart makes for a pleasant stop if you live in the Longmont area or happen to pass through.

BEER LINEUP: Despite the name, Grossen Bart is not a German-focused brewery and the tap list covers the spectrum of typical styles where you’ll find a kolsch, some ambers, and an IPA, along with several dark beers and even a barley wine. Unlike many breweries, Grossen Bart seems to avoid trend-chasing and I saw no sours, fruit beers, or hazy IPAs. Overall, our group enjoyed all of the solidly-made beers.

ATMOSPHERE: The taproom decor is kind of a mashup between industrial, rustic, and funky, with one wall given over to technicolor cartoons. Unfortunately rain prevented us from checking out either of the attractive-looking outdoor patios, but the spacious taproom allowed plenty of space to spread out. The general feel was relaxed and friendly.

SERVICE: Our server was friendly, enthusiastic and very knowledgeable about the beers. We really appreciated her help, as several of the beers have beard-related names without any description of the beer style.

NEIGHBORHOOD: Grossen Bart is tucked away at the end of a parking lot deep in an industrial park (look for the brewery sandwich board on the street). There’s not really a lot going on in the area except for lots of parking.

STANDOUT BEER: Mullet. This copper-colored, slightly-hazy beer is difficult to categorize but very pleasant to drink. What stood out most was the enjoyable balance between the maltiness of the lager base and the noticeable but not overwhelming addition of hops. The low carbonation and medium body also contribute to making this an easy-drinking beer.

When a friend scheduled a brewery crawl up in Longmont I had some reservations, given the remoteness of the location. However, I’d enjoyed Wibby Brewing at a few festivals so I made the effort to drive way up north and overall was pleased with the results. At heart, Wibby is a German-style brewery, which provides a preview of the beers you’ll encounter. The brewery is also all about about the outdoors with huge areas of tables and games but a rather cramped taproom; in other words, best to visit during warm weather.

BEER LINEUP: As mentioned, Wibby has a focus on German styles and you’ll find plenty of helles and dunkel being thrown around. However, likely in deference to current tastes, they also pour several IPAs, a red and other 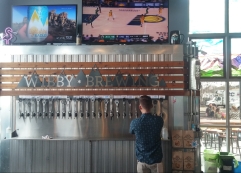 ATMOSPHERE: The setup includes a HUGE outdoor area with several seating sections plus a game area. The small indoor taproom definitely encourages taking the party outside. The overall design is relatively cookie-cutter; rustic/industrial with brewing equipment at one end and garage doors opening to the patio on the other. One novel concept is direct bar ordering from the patio. The crowd seemed younger and happy to be chilling out with some brews and bar games. With no kitchen, Wibby’s hosts food trucks to satisfy customers’ hunger.

SERVICE: The service was reasonably fast and the bartender was friendly.

NEIGHBORHOOD: The area is currently very industrial but appears to be transforming rapidly, with a huge apartment complex going up across the street. It’s just a couple of blocks from Longmont’s main street so a visit can be combined with some shopping and dining. It’s also within a longish walk or a short bike ride or drive to several other breweries so a pub crawl also works as an option. They have a parking lot plus plenty of street parking (for

now, at least). One additional transportation note: The Brew Hop Trolley runs on weekend days for those too tired or drunk to walk, bike or drive the route.

STANDOUT BEER: Moondoor Dunkel. At a German place I had to go native. This mahogany/brown beer hits you with heavy roasted malt and lots of it! Notes of chocolate along with the medium body keeps it from being overwhelming, though.

It looks like a rather slow weekend on the beer-events calendar but there are a few things to keep you busy. Sunday looks to have decent weather so checking out one of the many patio-equipped breweries could be an option.

Friday 13th – Sunday 15th: Hopefully the unlucky start date won’t weigh down Spangalang Brewery’s 3rd anniversary party. Join the crowd at the Five Points location to help celebrate, and if the weather’s nice you can piece together a nice RINO-area brewery walking tour.

Saturday 14th: The north suburbs gain another brewery with the grand opening of Primitive Beer in Longmont. The brewery produces spontaneous, barrel-fermented  beers using only Colorado ingredients for a funky local flavor.

Saturday 14th: Go highbrow with a book signing at Baere Brewing Co. Dustin Hall will sign his book of Colorado craft brewery photos called Discovering Colorado Breweries from 3-5, and of course Baere will serve their tasty beer all day if you want to linger.