For a place on hipster-heavy South Broadway, Baere Brewing Co.  feels surprisingly grounded. They don’t seem to be trying too hard to make a scene – angry, sour, kitschy, or anything else – and thus have a relatively traditional taproom with down-to-earth clientele and a beer list that contains well-done standards plus a modest level of experimentation. While I wouldn’t tag Baere as a destination hangout, the taproom is on the way to a lot of places which makes it easy to stop in for a couple of tasty brews.

BEER LINEUP: The beer list leaned heavily on IPAs but offered a fair amount of diversity from a super-light Berlinerweisse to a super-heavy Brown. Even non-hopheads will find something to enjoy.

ATMOSPHERE: Baere is located in an ancient strip mall that they’ve made the most of by adding garage doors, a patio, and filling it with rustic decor. The taproom opens to the brewery in back and accommodates some of the overflow barrels and product. The crowd seemed younger and more hipster, without a lot of families. It seemed like most people were passing through on their way somewhere else rather than making it their evening destination.

NEIGHBORHOOD: At 3rd and Broadway the neighborhood offers a melting-pot of old & run-down, slightly-dated, and new & fresh – both in the buildings and the people roaming around. The area gets a good walkability score, with lots of other businesses, restaurants, and breweries along the strip. It’s reasonably accessible by public transit busses, and parking is decent with both strip-mall lot and street parking.

STANDOUT BEER: Brown. It’s really more like a Brown on steroids with a higher-alcohol barleywine flavor and hints of heavy roast and coffee. With the heavy body and strong flavors it’s clearly a sipping-beer that gives a pleasant warming sensation the more you drink

For a remote brewery hidden in a quiet industrial park, 105 West Brewing Company packs in some happy surprises. On our visit, crowds of all types filled the taproom and gave it an energetic feel, while the comprehensive beer list delivered both variety and flavor. It’s a bit of a drive from Denver but well worth a stop if you find yourself in Castle Rock or commuting to Colorado Springs, since it’s less than five minutes off the highway.

BEER LINEUP: 105 West sticks to traditional styles and has great coverage from a light wit to a dark stout and high-gravity Tripel. All the beers I tried fit squarely (and tastily) into their named style category so count on getting you ask for.

ATMOSPHERE: Despite the lack of any discernible neighborhood the place was packed with energetic people (and dogs) of all ages including families with kids. The actual space shows an attempt to dress up a basic industrial park box with some rustic wood and an open brewery, but in the end you’re not coming for the pretty decor. There’s also a small patio out front and they seem to regularly have either a food truck or someone squished in between fermenters dishing out grub. 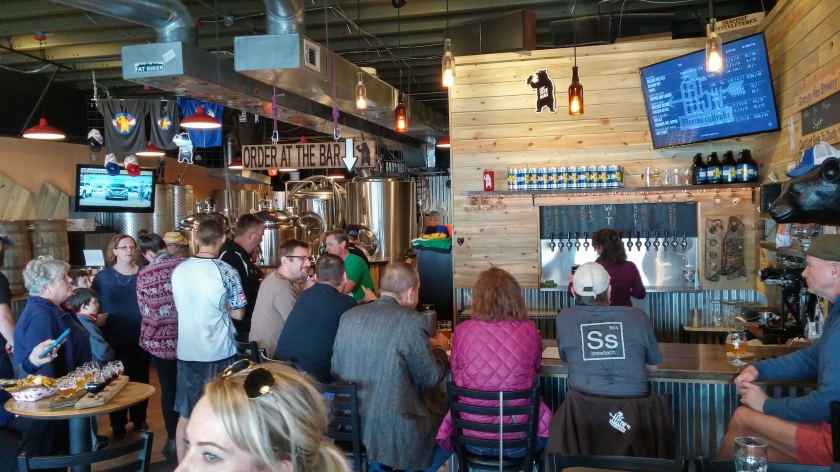 SERVICE: This one cut both ways during our visit. While the servers helpfully chatted up customers, poured samples, recommended other beers, etc. (+), this tended to jam  up lines at the bar (-). It wasn’t the biggest deal but be warned if you are beer-desperate. One interesting note is the no-tipping policy; any tips go to charity.

NEIGHBORHOOD: Industrial park with few attractions around other than a brew shop two doors down. Given the Castle Rock location this one’s definitely a driving destination and thankfully features ample parking.

STANDOUT BEER: Belgian Tripel. This beer blended great Belgian yeast flavors with a little bit of farmhouse for an extremely balanced and flavorful Tripel having just the slightest bit of sweetness. The beautiful golden color made it even more appealing, and the slight cloudiness visually reinforced the yeast and farmhouse flavors.

If you’re a stout fan then Halfpenny Brewing Company’s limited time (til they run out) Flight of the Stouts is worth the trip down to the DTC area. The lineup features five stouts ranging from standard tap fare to barrel-aged to high-gravity and each has its own charms. A quick summary:

So right off the bat, yes, Breckenridge Brewery is owned by Inbev so it rides the line between craft beer and big-bad-industrial-beer ownership. And frankly, it also feels rather mass-produced (though The Farmhouse was completed before the Inbev deal). Perhaps Breck intended for the suburban crowds of Littleton and Highlands Ranch to feel like they have a “craft brewery” in their neighborhood without actually having to travel or subjecting themselves to anything unfamiliar. Be that as it may, a friend suggested Happy Hour there so off I went and, as designed, had a pleasant and non-challenging experience. The Farmhouse serves all the Breck standards and happily seems to now use some of that added brewing capacity to make stuff you can’t find at the local liquor store. They also do have some pretty great comfort food. I certainly wouldn’t recommend it as a destination, and truthfully there are plenty of actual, great craft breweries within a couple of miles, but if you do go (perhaps with kids or grandparents) everyone will likely have a pleasant-enough time.

BEER LINEUP: Improved. Previously The Farmhouse offered the same old Breck brews you could get at any restaurant or liquor store (think Avalanche, Agave Wheat) but has since expanded into some one-offs like an orange chocolate stout and barrel aged beers. While not covering every style they have a broad selection from very light Kolsch to deep, dark stouts. Nothing way out there like sours, though.

ATMOSPHERE: Cracker Barrel on steroids – like a rustic building decorated by a midwest housewife with lots of tacky stuff to buy.  It definitely has a family restaurant atmosphere, much like White Fence Farm in Lakewood and it almost seemed like more people came to eat than drink.  I guess that’s not surprising considering the food was fantastic. During the summer the large patio and recreation area offers additional hangout options.

SERVICE: Fun, at least at the bar. The servers flirted and teased the customers and each other. It seemed like the servers actually enjoyed their job. When we needed anything or placed an order they were fast and attentive.

NEIGHBORHOOD: None to speak of. Breck sits on its own semi-rural campus between downtown Littleton and C470 on Santa Fe. The campus backs up the Platte River and trail, and features numerous production buildings for both  Breckinridge and contract brewing along with an unrelated winery.

STANDOUT BEER: Dry Irish Stout on Nitro starts off thick and creamy with heavy roast malt and, as promised,  a drying sensation on the tongue which left minimal aftertaste. Simple but pleasing.

If you’re needing an excuse to get out to try new breweries around town and meet some new people check out the Denver Mug Club. It’s basically a traveling version of the mug clubs that many individual breweries have, where you get your own personal mug that gets you discounts on fills and other perks. From the sound of it, they lug a case full of mugs to a different brewery every month and you get your first beer free, discounts on additional

beers all month, and some other perks. All this for 10 bucks a month.

This trip includes two breweries from the earlier January trip Pub Pairing but adds Brewery Rickoli to the mix. With the addition of Rickoli, a car or maybe bike becomes necessary vs. walking.

We started the afternoon at Brewery Rickoli, which is somewhat camouflaged in an old strip mall near Wadsworth & 38th. The brewery offers a homey atmosphere with very friendly service, a small patio, and a diverse and quirky selection of beers, which make it a comfortable place to park yourself for the afternoon and watch some sports or hang out with friends. The place generally seems to be busy hosting a neighborhood crowd, without being overcrowded, so the servers can still take time to explain their beers, make suggestions, and offer samples. The beers range the full spectrum from light to dark, along with some unexpected (but usually tasty) flavor combinations. For a full description, see the recent Brewery Snapshot.

Next we drove up to Olde Town Arvada to visit New Image. Because it’s at the edge of town, you can park pretty easily as long as you watch for the two-hour zones. New Image seems to try for the trendy/Highlands vibe, both in the décor and long-winded explanations of their philosophy and processes surrounding food and drink. Sadly these don’t seem to include key words like organized or tasty. Our group was disappointed by the way our server, occasionally carrying a random scrap of food or drink, would haphazardly pop out of the woodwork. That was compounded by the uninteresting flavors of whatever stray food happened to make it to the table. However this blog is about beer, so if you can get them to serve you one and like things in the sour, brett, and hoppy categories, you might be able to overlook the service. See the Brewery Snapshot for more info. New Image also has a full bar including guest brews if you New Images’ beer isn’t your style. END_OF_DOCUMENT_TOKEN_TO_BE_REPLACED

At first glance New Image Brewing Co. seems to have a lot of potential, with its convenient location at the edge of Olde Town Arvada, its sleek modern look, and a trendy-sounding menu. However that starts to fall apart soon after setting foot inside when it becomes apparent that things are not really all that put together. Perhaps it’s that New Image is trying to be too many things at once – modern industrial and trendy, old-world handcrafted brews, restaurant, bar, hippie hangout. They definitely have some talent in making experimental beers but the rest of the experience feels equally experimental – from the service to the food things just don’t seem to come together. If you’re in the area it is worth a stop for a quick beer but don’t expect much else beyond a slightly confused experience.

ATMOSPHERE: Confused. The decor says modern industrial trendy with metal & wood but the menus say handcrafted food & beer while the waitstaff says whacked-out & stoned. Nevertheless it seemed like a neighborhood drop-in with plenty of families at long picnic-style tables.

SERVICE: Slow and poor. All food orders went in at the same time but came out whenever. Some of our table finished eating before others were served, and the consensus on the food was “Meh” – bland and unexceptional. Likewise when checks were requested some were brought, others not, the waiter would wander over and collect one or two at a time, bring back one person’s change then wander off somewhere else. It was not a busy or hectic afternoon where that might be understandable.

NEIGHBORHOOD: New Image is at the edge of Old Town Arvada so it’s a very walkable area with lots of other small businesses. You can find nearby street or lot parking.

STANDOUT BEER: Timber Rye Wine With Rosemary has a great balance starting with a base that tastes a little of barleywine, complemented with a gentle rye flavor and strong rosemary. As one might expect it comes with a higher alcohol content and the thicker body of a barleywine.